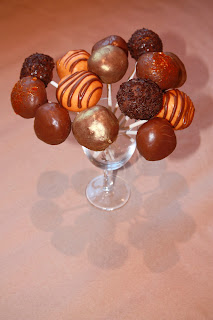 Yesterday, I decided it was time to use up the orange cake that I had in the freezer from my failed Disney castle cake. I’d taken the cake out of the freezer on Friday night and it was soft, moist and ready-to-go by mid-afternoon. As Christmas is fast approaching, I decided on a chocolate orange buttercream – adapting the chocolate buttercream in the “Cupcakes from the Primrose Bakery” book by using orange zest, orange juice and a splash of orange essence rather than milk.

I followed the method described in Carolyn White’s Cake Pops book. Trying to make perfect spheres out of the sticky buttercream and cake crumb mixture isn’t that easy but I gave it a go! Having left them to firm on a tray in the fridge – they came out with rather flat bottoms! Not sure if this is avoidable without a mould.

I used two different coatings for my cake pops: Silver Spoon orange flavour buttons and Wilton Light Cocoa Candy Melts. I used the double-boiler method of melting these, adding a few drops of orange essence to the candy melts. It was necessary to add quite a bit of oil (I used sunflower oil rather than vegetable oil as that was what we had in the cupboard!) to make the chocolate runny enough to pour over the cake pops. The book suggested that you could dip the cake pops into the melted chocolate to coat – this just didn’t work for me so I decided that it was a much better idea to pour the melted chocolate over the cake pops using a spoon. I don’t think I got the melting/tempering quite right as the chocolate on the cake pops didn’t quite have the snap of correctly tempered chocolate.

Overall – I was really pleased with the flavour of these cake pops: the chocolate orange tasted delicious. I’m not completely sure about the texture – it all seemed a little soft and squidgy. I’ve not had cake pops before so I’m not sure if this is typical – as mentioned above, correctly tempered chocolate would have added more of a snap. I guess you could also add in some crunchy bits – maybe some chocolate drops, or honeycomb could be nice.

In all, I’m not really a convert to cake pops – it seems like quite a bit of effort for an end result that I’m not completely convinced by. I wouldn’t bother making cake specifically for this but may give them another go if I had some left-over cake crumbs again at some point.

For the orange cake:


For the chocolate orange buttercream

To make the cake pops (makes about 30) 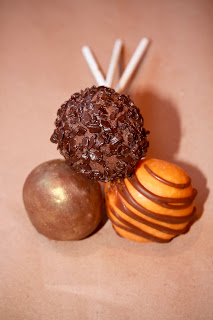