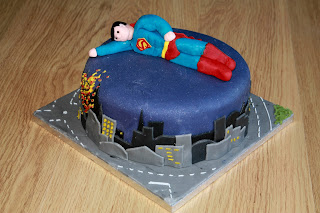 So, third chocolate cake in three weeks! Not bad for someone who doesn’t make chocolate cakes! This week’s cake was for one of my good friend’s son’s 4th birthday – his requirements were that it had to be chocolate and had to have Superman on it!


I did consider buying a Superman – maybe a Lego Superman – to pop on top of the cake, but somehow I let EHH convince me that it would be a challenge to make a Superman figure out of icing and that I would enjoy it. Hmmm – enjoy isn’t quite the word that I’d have used on Thursday night as I wrestled with red and blue icing, trying to convince it to come together into the muscled physique of an action hero. The ripped torso was actually fairly easy – it was the sticking on of limbs and the creation of the head that were the tricky bits. However, after a bit of swearing and the help of a few cocktail sticks, it all came together. His nose ended up a bit squashed and his red pants looked a little like a nappy, but he was clearly recognisable (red pants over the top of a blue superhero suit and a big Superman sign on his front always help with this!) and that would have to do! I left doing the red cape until he was actually on the cake to help with positioning.


Once the cake was made and filled and topped with buttercream, I left it to set in the fridge for about an hour. This allows the icing to firm and makes covering it in rolled fondant much easier. I covered first with a fairly thin layer of plain white rolled fondant, followed by a thin layer of navy rolled fondant. You could tint the fondant yourself but I always find tinting a big batch of dark coloured fondant very messy and time consuming, and it also requires a lot of food colour – even when using the decent paste food colours – so I always buy pre-coloured fondant for dark / bright colours. When rolling the fondant out, I suggest rolling it onto parchment paper that has been lightly dusted with icing sugar – you can then simply lift the parchment paper up and turn over onto the cake. 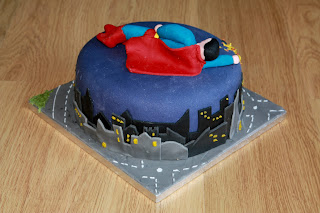 Once the cake was covered in navy fondant, I rolled out some black fondant and cut out various geometric, building-like shapes and stuck them onto the cake with a little water. I then added some white to the black fondant, rolled it and cut out more shapes that I stuck on top of the black cut-outs. I then repeated this – adding more white to create a lighter grey fondant and creating more shapes to create a third layer of buildings. I then used yellow writing icing to add some windows and, along with some red writing icing, to set one of the buildings “alight”! Popped Superman on top and rolled out some red fondant to make his cape, sticking it on carefully with a little water.


Finally (at about 1.30 at night!) the cake was complete! It took quite a lot of time and effort but I was fairly happy with the end result!